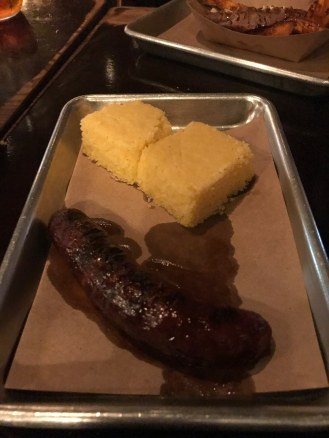 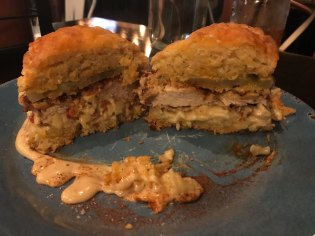 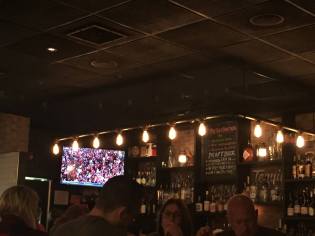 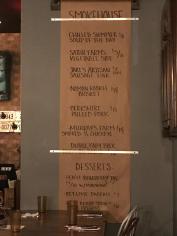 Huntington Village is now the home of two new BBQ restaurants; Radio Radio and Old Fields. My daughter and I recently had dinner at both. Our most recent night out was to Radio Radio on Clinton Avenue.

I decided to have dinner at Radio Radio because I was craving brisket. I have already been to Old Fields so I wanted to give the second restaurant a try. My first thought was it was small and a bit dark. The size was not a surprise being in the heart of Huntington Village. There weren’t many customers having dinner at that moment so we were able to choose our table.

We decided to share our entrees so we ordered brisket, sausage (I believe it was brisket sausage that night), the Chicken Biscuit Kitchen Sink and sweet potato wedges. The Chicken Biscuit sandwich was huge and excellent. The chicken was placed between a giant cheddar chive biscuit with pimento queso mac n’ cheese, fried green tomatoes and spicy BBQ mayo. The brisket sausage was surprisingly good. I didn’t know what to expect but was happy with the taste and consistency. It was very tasty! If I had ordered two, I would have been very satisfied. The sweet potato wedges were prepared well and enjoyable. At this point we were pleased with everything on the table.

Where’d they go wrong? The brisket! I asked for moist brisket. What they brought to me was anything other than moist! The brisket was dried out, hard to the touch and flavorless. I don’t know what the problem was or how long the brisket was sitting around but there was no way I could eat it. I called our server to the table and told her the brisket was just too hard and dry to eat. She immediately apologized, removed it from the table and brought me a new serving. The second serving was moist but it still lacked flavor. Even the bark was tasteless. How can that be? That should be full of flavor.

I told my daughter I was very disappointed with our meal. She reminded me everything was very good other than the brisket. She was more than happy with the food and said she would definitely come back. She was right. The food was very good other than the brisket. My problem was I went there specifically to have my craving for brisket satisfied. Because that did not happen, overall, I felt let down. Had I just gone there for dinner without a desire for brisket, I would have been content with our meal. I would go back again but for the brisket sausage and chicken sandwich. I am not sure I would give the brisket another try.

Dessert is a big deal for me. After a good dinner, I want a great dessert. Unfortunately, they did not have anything on the menu that appealed to me. I could have overlooked the problem with the brisket and left feeling very happy if they had a good bread pudding, peach cobbler or red velvet cake for dessert.

Overall, good food. I wish I could rate this 4 or 5 stars but they lost points with me for serving dried out brisket that should have never left the kitchen. Better luck next time.